Reentering society after years in prison is difficult for many reasons, among which perhaps the most prosaic is simply that it’s hard to get a job — and what training and transition programs exist are far from sufficient. Emerge Career hopes to change that with an improved in-facility training curriculum that prepares the soon-to-be-formerly-incarcerated for an in-demand job using a more modern method.

The startup, itself about to emerge from Y Combinator’s latest batch, was founded by two people who had been working on improving another shortcoming of the prison system: video calls. Ameelio, which I covered back in 2020, replaced aging proprietary video calling systems in prisons with ones based on a modern open source stack, saving money and making the whole operation simpler and better for everyone involved.

“Having spent the last three years developing tech for prisons, we got a feel for the major challenges that are facing people post-release, particularly job and employment stuff,” said Uzoma Orchingwa, co-founder of Ameelio and Emerge Career with his colleague Gabe Saruhashi. “Reentry and in-prison education is left up to very small and underfunded organizations, and workforce training post-release relies on typical brick-and-mortar schools, which obviously limits their reach and ability to scale.”

Prison calling systems attracted complaints from regulators and activists because they are exploitative and unethically run, but in this case it’s more like even people with the best intentions were facing an uphill battle against entrenched methods and red tape.

“So we felt the need to start a separate entity for upskilling formerly incarcerated people and using government money to do it,” Orchingwa continued.

To be clear, though, this isn’t some new drain on state budgets.

“There’s already money for training, but it’s under-utilized,” explained Saruhashi. “With one state agency we’re working with, they had money allocated but not enough training providers.”

These providers tend to be local vocational schools and community colleges with very limited resources. While they can provide some training, they aren’t versed in the prison and post-release ecosystem, which involves more bureaucracy and personal restrictions than the schools tend to be capable of handling.

Ameelio has helped prison systems upgrade the standard of technology for inmates with its managed tablets and video calling, and some of that same tech is being leveraged here.

“We built an online-offline system, recognizing folks won’t always have access to the internet. All the work can be done offline, and when they’re online they can sync up — it’s similar to Coursera,” Orchingwa said. “We have an instructor who can support students virtually using the communication system; we work closely with the Ameelio system as well, to have office hours and support students’ needs.”

Once out, they can finish up the class using a mobile app that works in all the same ways. (They pointed out that the under-employed like the possibility of doing a bit of job training between gigs.)

Saruhashi noted that the team’s experience working as a vendor for corrections means they understand the environment in which their system will be used, like security limitations and on-site procedures. There are also ways of getting the required paperwork, identification and other personal and professional documents that are a logistical challenge unlikely to be taken on by a small local trade school.

The first training program Emerge has been making available is a commercial trucking license. The trucking industry is approaching crisis with a shrinking population of workers and difficulty attracting new ones. The pay is good and the work is steady — perfect for someone trying to get back on their feet. Some prisons even have the simulators or trucks necessary for the hands-on part of the training. And demand for drivers is high enough that employers won’t bat an eye at the prospect of hiring a formerly incarcerated person.

Here’s Trevon talking about how it went for him:

Anyone who’s worked with folks coming out of prison (I did, years ago) will have seen how much pressure is put on them, yet at the same time how much opportunity is denied to them. Someone like Trevon is a living testament that a little help goes a long way, not just for him individually but for the community and government, which he will now support rather than be supported by.

It attracted the attention of legislators, who are always on the lookout for ways to add jobs (check), reduce recidivism (check) and tie budget line items to tangible results (check).

“The transportation commissioner was actively looking for ways to get more people into the profession. So he gave money to the DMV to come to the prison and proctor tests, then post-release they go straight to our trucking partners,” Orchingwa said. 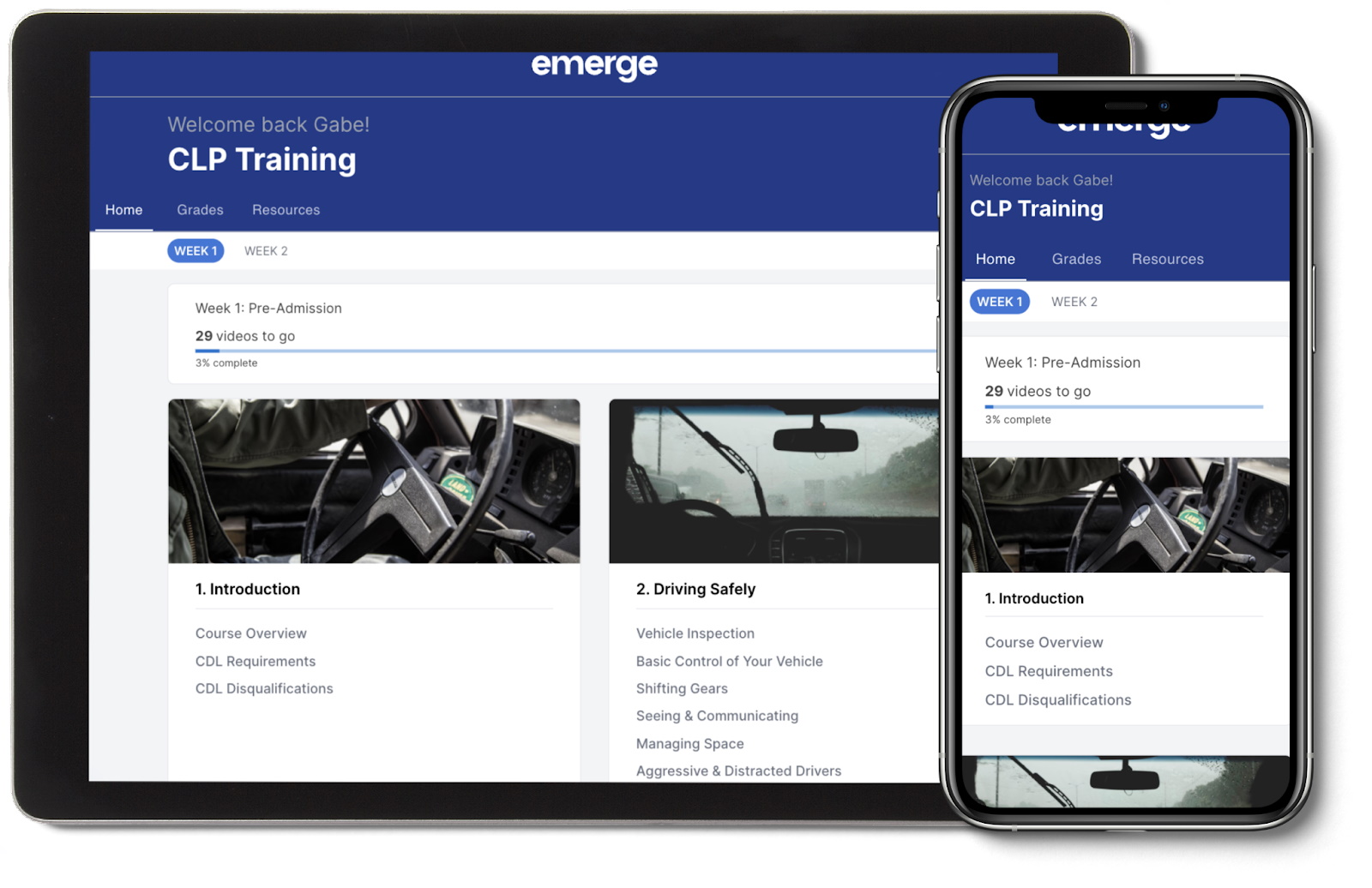 Not that the business needs friends in high places to get things done — but someone in charge generally does have to notice in order to allocate the money to Emerge as a state vendor. If the model works, it benefits everyone. The company has signed over $2 million in LOIs and contracts starting in Connecticut and is in talks with three other states.

“There’s actually a surplus of funds, and regardless of your values or political leaning everyone sees a major need for this; there’s a trucking shortage and a lot of folks are struggling and unemployed,” he added.

After showing their system works with trucking, the company plans to expand into manufacturing, healthcare and other industries where there are serious labor shortages. The obvious possibility of coding-based professions is on their radar, but the competitive job market in tech right now makes it more likely someone will face a 4-6 month application and interview process, not something a recently released person can afford. “Our people need jobs right away,” said Orchingwa.

Emerge Career is organized as a public benefit corporation and is looking for like-minded investors as it finishes up its stint at Y Combinator.

Come Back to the Office

Making A Habit Of Mindfulness And Meditation With Urban Health

Making A Habit Of Mindfulness And Meditation With Urban Health

Streaming Services are About to Change with Content Aggregators

Get CompTIA Certified and Future-Proof Your Skills