Rapid grocery delivery startup Voly appears to have ceased deliveries on Friday evening, with users on the app receiving a message saying the business is “closed until further notice”.

“Our hours are: Mon-Sun Closed” the app said when Startup Daily attempted to place an order.

The message in response to orders on the Voly app on Friday, Nov 11.

Earlier this week the company reportedly cut staffing for the second time in six months, less than a year after banking $18 million in a Seed round.

The business such down its social media accounts in the last 24 months and has not responded to queries from Startup Daily.

The Sydney-based online supermarket launched in July 2021 with the promise of grocery delivery 15 minutes or less. More staff at the business were reportedly laid off this week, having retrenched half its office staff and closed warehouses back in June, just weeks after the collapse of rival Send.

Send was placed in voluntary administration less than 12 months after launch.

Voly was serving 42 suburbs across Sydney, but more recently concentrated south of the Harbour Bridge on the Eastern Suburbs, CBD and Inner West.

It increased its delivery time from 15 to 20 minutes and halted plans to expand into Melbourne.

The company’s marketing continued, including in-app ads seen by Startup Daily this week. But in the last 24 hours, Voly has deleted its Instagram account, which had not been posted on for a month, as well as removing its Facebook page. 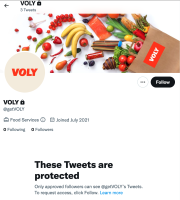 The company did not respond to Startup Daily’s latest request for comment.

Co-CEOs and cofounders Mark Heath and Thibault Henry told staff earlier this year that the business had enough runway to survive until February 2023.

But Voly faces a drop in discretionary spending amid rising interest rates to tackle high inflation alongside a downturn in capital investment for startups.

It also competes against a better-funded rival in Milkrun, which banked $75 million from Tiger Global in January, as well as global players such as Doordash and UberEats.

Does Facebook Notify When You Screenshot a Story or Picture?

How wrong were our 2022 startup predictions? • TechCrunch

5 Reasons You’re Stuck In the Weeds, Instead of Spending Your Time Strategically