The use of virtual reality (VR) devices has been growing rapidly in tech-driven organizations. The technology is being used in a wide range of applications, including training, marketing and sales, and entertainment. 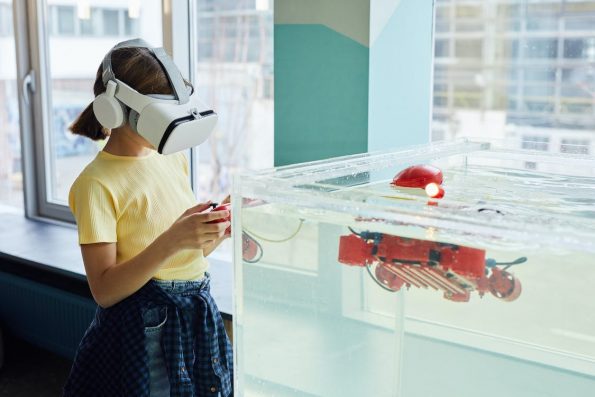 According to the 2021 XR Industry Insider Survey, 83% of industry leaders think there would be increased investments in immersive technology in 2022. VR devices are used to create interactive and immersive experiences that can be delivered through connected devices such as smartphones, tablets, and desktops. VR has enabled people to engage with products and services in ways that were previously not possible.

Here are four catalysts for the increased adoption of VR devices in tech-driven organizations:

The availability of VR devices at affordable price points is a catalyst for the increased adoption of VR devices.

Today, the number of consumers who own VR devices is increasing. The 2022 Annual Survey on Consumer Attitudes Towards Technology by GroupM found that 32% of respondents own AR or VR devices, while another 15% agreed to buy a device in a similar category in the upcoming 12 months.

Within an environment where VR is increasingly being adopted by consumers, tech companies are not staying behind. This is especially true when they are available at affordable price points, making it easier for tech-driven organizations to invest in VR without breaking their budgets.

For example, Oculus Quest is a new VR device from Meta that enables users to immerse themselves in virtual worlds without being tethered to an expensive computer or console. It’s being adopted by tech organizations that want access to immersive experiences but don’t have the resources for other types of hardware.

However, before you decide to take the plunge and invest in this VR system for your organization, make sure you dig deeper into the problems associated with using it for business. For example, one of using Quest for business challenges you might face is privacy concerns, making it difficult for your customers to use the device confidently. Make sure you educate yourself about the challenges before being bullish on the device.

Growing Use of VRs in Healthcare

According to a recent research report from Fortune Business Insights, the worth of VR in the healthcare market was $459 million in 2021, which would expand at a growth rate of 38.7% between 2022 and 2029.

Tapping into the massive potential of VRs in healthcare, many providers are coming forward by providing unique solutions to the industry. For example, Vivid Vision, a vision care service based in San Francisco, offers innovative VR-based solutions for lazy eye disorders.

VR will allow doctors to examine patients from different angles without having to physically move around each time. This will also reduce the risk of infection since doctors will not be touching patients directly as much as before.

Another benefit of using VR in healthcare is that it allows doctors to see what’s really happening under the skin without having to cut open a patient’s body or remove any organs for examination purposes. The technology even allows them to observe things like blood flow through arteries or veins without having any invasive tests done first. This can lead to more accurate diagnoses as well as faster treatment options if needed.

Virtual reality has been a major disruptor in the tech space for a while now, but it’s only just starting to make its way into the mainstream. As more and more companies embrace VR, we’re going to see an increased adoption rate at all levels of the business, including those that are tech-driven.

The findings suggest that VR will become an increasingly important training tool in the near future as the technology evolves and becomes more widely available. In addition to being able to practice skills repeatedly before they’re actually needed in the field, VR also saves companies money.

One of the biggest expenses for businesses is training employees on how to do their job properly. With VR technology available today, you can reduce your cost by allowing employees to train themselves without having to hire someone outside of your company for this purpose.

As the world gets more and more tech-driven, a lot of companies are looking for ways to increase their bottom line and productivity. One way to do this is by using virtual reality (VR) devices.

With VR, employees can train at home and in their spare time on devices that are smaller than ever before. They can learn more quickly and efficiently than ever before, which means they’re more focused and productive. This leads to better results for companies: higher productivity rates in less time spent at work.

The bottom line? Companies see an increase in sales and productivity when they invest in VR training programs for their employees.

In conclusion, these four catalysts for the increased adoption of VR devices among tech-driven organizations show that the technology is gaining massive traction.

The post 4 Catalysts for Increased Adoption of VR Devices in Tech-Driven Organizations appeared first on The Startup Magazine.

7 Lessons That All Entrepreneurs Must Know

Feeling Distracted? 10 Tricks For Getting Your Focus Back On Track

How To Utilize Simultaneous Competing Buy- And Sell-Side Contracts