Metrist, a startup that helps IT teams stay on top of outages among the many cloud services they use to run their own applications, today announced that it has raised a $5.5 million seed round from the likes of Heavybit, Morado Ventures, as well as PagerDuty co-founder Alex Solomon and StatusPage co-founders Scott and Steve Klein.

The overall idea behind Metrist is pretty straightforward, but there are surprisingly few companies doing this. While products like Twitter or StatusPage (which is now owned by Atlassian) allow companies to easily communicate issues with their services to their users, they don’t always reflect every problem and service degradation — something that then comes into play when it’s time to review an SLA agreement or a contract comes up for renewal and the two parties have vastly different perceptions of a product’s reliability. And while application performance monitoring and observability tools like New Relic or Honeycomb can give you some of this data, it’s not their core use case as these services tend to be inward facing.

“Apps are built on top of other apps today,” Metrist co-founder and CEO Jeff Martens told me. “That means if one of them goes down or gets degraded or has some kind of an issue, your app and your business can potentially have the same fate. But current observability tools don’t do anything special for those external dependencies — they still continue to focus inward. You can find out things about your external dependencies — it’s not that you can’t know — but the challenge really becomes verifying so you can take action, but then also hold your vendors accountable.”

More than anything else, Metrist wants to become the trusted neutral player that buyers and vendors can refer to when they discuss outages. The service will be a success, Martens said, when Metrists is written into a contract as the third-party independent validator of an SLA.

“Too many of the incidents posted to StatusPage simply reference upstream or third-party providers,” said StatusPage co-founder Steve Klein. “It’s exciting that Metrist is going after the root of the problem, creating visibility where before there was none.”

On the technical side, Metrist uses either an agent or eBPF to gather data about the services a company runs, but it also constantly checks for downtime and service degradations from 21 different cloud regions across AWS, Google Cloud and Microsoft Azure. Out of the box, Metrist covers more than 100 services, but customers can also host their own tests or use in-app tests. The team noted that these tests also go well beyond simply checking for a correct HTTP response code.

“It’s not just like pinging an API and saying, ‘does this URL return to 200 or 202?’ Say you’re hitting an endpoint and it’s supposed to create a thing in that platform — we actually will call the retrieval API later to see how long it took to create that thing,” Metrist co-founder and CTO Ryan Dufflield explained.

Customers also get a lot of flexibility when and how they get alerted of an issue. For some, a two-percent increase in latency may be unacceptable, while for others, that’s no issue, for example. Alerts can go to Slack, email Datadog or PagerDuty (and users can create their own alerting systems using webhooks, too). 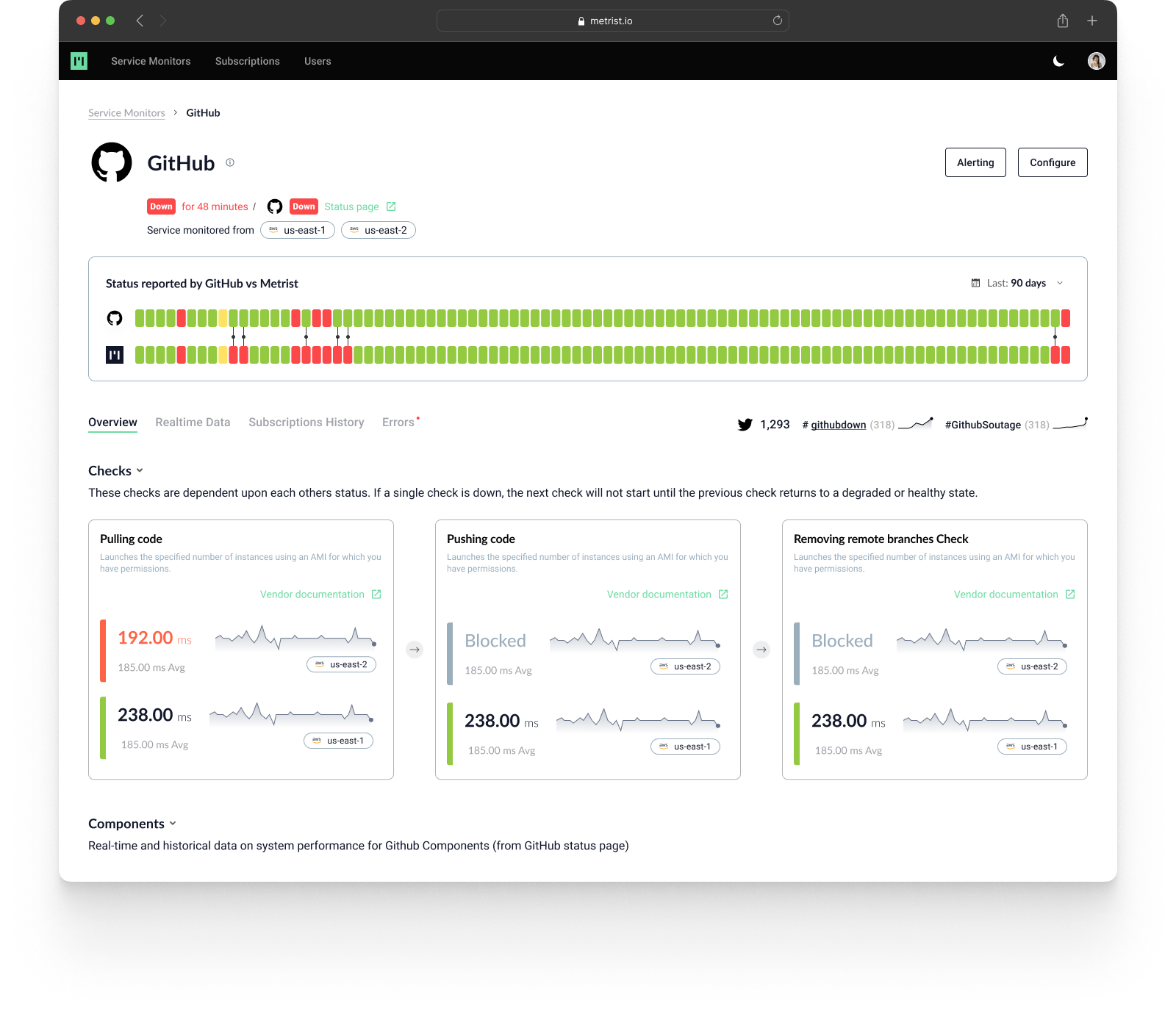 While Metrist is only announcing its funding today, it’s worth noting that the team actually raised this amount over two different raises, including a pre-seed before the product even existed. Both happened proactively, Martens explained, without the team actually going out to raise. This happened just before the economy and the funding environment changed.

“Modern applications depend on an ever-increasing number of cloud products managed by external vendors, but the overall approach to observability hasn’t changed. You wouldn’t dream of operating your internal services blindly and you need to manage your cloud dependencies with the same care,” Heavybit general partner Joe Ruscio explained. “Metrist enables teams to proactively know when an external service is down, with the goal of avoiding or mitigating incidents stemming from dependencies. Metrist’s approach to third-party observability ensures teams know authoritatively when SLAs are not met.”

Summer podcast binge: The founders of leading Australian startups reveal the secrets behind their success – and the lessons from failure